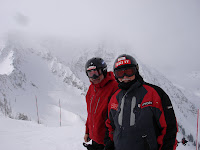 On the slopes abut 10 AM after getting in from a late flight the night before. A test of toughness to adapt to the high altitude. Colin and friend Bobby served as guides for the early runs. Took the tram to the top through fog and poor visibility. Visibility improved and had some nice runs on the some blues. My energy level wasn't sufficient to sustain a very high pace. Took a long morning coffee break and continued with a run over to Big Emma before lunch. Big Emma was in a dense fog and challenged my orientation. By lunch at 1:00 PM I was pretty well wasted. Post lunch I chilled by reading the New York Times and resting up for a go on the Wilber chair part way up the mountain.

Didn't see anybody that qualified as a geezer. Mostly youngsters. One college student rode up with us and was cutting class. I told him I was a professor and would give him an excuse or teach him on the lift. Unfortunately I couldn't give him an excuse that was valid.

A good first day and with rest I hope to last longer tomorrow. Colin's condo is a great place to stay and Bobby is cooking dinner now. He is being nominated to be an honorary geezer.
Posted by Gerry Rehkugler at 5:48 PM