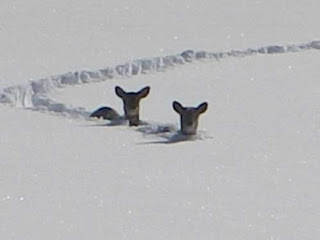 A great day at GP with 6 to 8 inches of new snow. Super conditions starting with about 3 inches on groomed and then receiving 3 to 5 inches during the morning. The early runs were superb with smooth turns kicking up a trail of powder snow. The later snow was heavier and demanded a more aggressive attack of the hill.
I like the challenge of skiing the deeper snow even if it becomes a bit heavy. As Tony an instructor said at morning coffee put your skis together and tip into the turn and ride the wave. As the day progressed, I continued to enjoy the conditions but by early afternoon I was beginning to feel fatigue in the legs. There were still untracked areas to be explored but my legs were saying it was time to go home. Rather than pushing the envelope I decided to terminate the day while I was still ahead. Managed to ski the steeps of Zeus and Hercules with some level of grace too.
It was good to get home to blow snow out my driveway and one of my neighbors. On top of that it was a great day to get a Valentine gift for my bride.
Posted by Gerry Rehkugler at 4:50 PM

Epic ski morning! One of those days that "take the wrinkles out of your soul". I believe that days spent skiing powder don't get deducted from one's lifespan.
P.