Enjoying the Gifts of the Day

After I presented my lecture on the history of plows last week there has been a flurry of activity to archive my presentation.   My colleague Bob Cooke is a master of producing DVD's and getting material  into eCommons at Cornell.   He has kept my nose to the grindstone putting out material to embellish my lecture with background material on plows and their connection to Ezra Cornell and Cornell University. It is indeed a gift he has for completing archival projects and indeed a gift to me to have this material featured in the  Cornell on-line materials.
Although I have been quite busy at the office, I consciously try to be aware of the burgeoning of Spring.  The grass has turned a beautiful green and believe it or not it was fun to crank up the mower and complete the first lawn mowing of the season.   In front of my department's building at Cornell are a group of flowering plum trees that are in full bloom.   I had the good sense to enjoy their beauty each time I entered and left the building.
Gifts of the day come in many forms.  A smile from  a friend, lunch with a colleague,   the pleasure of the ride in my Smart for Two car, a glass of good wine,  tennis with Nancy, success with a complex crossword puzzle, and an invitation to a North Rose Central class of '52 luncheon are but a few them.   Enjoy living in the present! 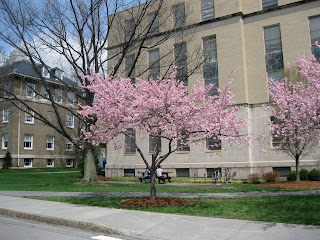 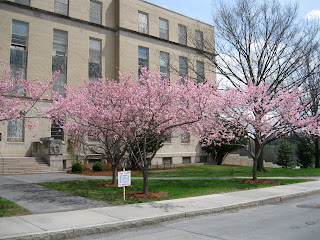 Posted by Gerry Rehkugler at 2:52 PM No comments:

At the end of ski season on April 10, 2011 I had accumulated a whole line up of things to do with family, friends and at  Cornell.   I have been so busy that blogging became a low priority.   So I can't believe that 15 days have past since I had an inspiration for writing.   On this Easter Sunday afternoon I am motivated to share a few of the things that have happened in the last two weeks.
Although the weather has been mostly cold and rainy, Nancy and I have played tennis outdoors several times and even occasionally with sunshine on our play.   A trip to Long Island to visit daughter Viki and son-in-law Matt  took up the Palm Sunday weekend.   Travel was uneventful for a trip through NYC and we had a delightful Saturday evening at Town Hall on 43rd Street  at the Prairie Home Companion show hosted by Garrison Keillor.   Lots of laughs and wonderful entertainment with song and word.

This past week I have been totally occupied preparing for and giving a presentation to the Cornell Association of Professors Emeriti on April 21st.   For the past two years I have been rehabilitating and documenting a collection of model plows acquired by the first Cornell president Andrew D. White in 1868.    These model plows were produced at the Royal Agricultural College of Hohenheim by a master craftsman under the direction of Professor Ludwig Rau.   The models trace the development of the plow from around 3000 B.C.E. to the mid 1860's.    Thursday I had the pleasure of presenting a story about the Cornell collection over the years as well as illustrating the evolution of the plow over the ages as represented by the plow models.   The lecture has been videotaped and will be available on the Cornell E-Commons website in the near future.    My presentation was well received and I think the geezer professors in attendance found it interesting.   Here are a few photos of the event.


It is somewhat intimidating to appear before a hall full of academics but I survived.
After an uplifting Easter service this morning, we had a wonderful family dinner with several children and their spouses or significant other in attendance along with three grandchildren.  Our dining room is beginning to bulge at the seams.   I am blessed to be the geezer patriarch of this gathering.   Nancy as usual prepared a superb meal to the delight of all partaking.
So on to another week of busyness.   The to do list is somewhat shorter but still is a priority.
Posted by Gerry Rehkugler at 2:41 PM No comments:


Preparation and Celebration
Ski season ended.
Hundreds of runs were enjoyed.
Have next season's pass.
Yes, the next season's pass has been purchased for most of the Tough Old Geezer Skiers and we are looking forward to another enjoyable winter on the hill.  Meanwhile tennis and golf  beckon.  Keeping healthy and fit are on our agendas.  And I think I'll give the haiku writing some more thought.

Posted by Gerry Rehkugler at 11:45 AM No comments:

I think that many of us have heard the expression, "Whatever I want to accomplish I have to do something else first".   This applies to every activity we participate in.  To go skiing I have to put on the appropriate gear,  travel a short distance and be sure I have my pass ready.   Playing tennis today required dressing for the weather and being sure we had some tennis balls.   And on it goes.
Perhaps the reason I am so alert to the need to do something else first is the preparation I am going through to make a presentation to the Cornell Professors Emeritus on the Rau model plow collection and the evolution of the design of the plow.   April 21, 2011 I will be facing an audience of my peers.   These peers are distinguished academics so it is somewhat intimidating.    To make this presentation interesting and clear I have been learning Power Point - "a something else first".
I have been working on the Rau model plow collection since 2009.   This historic collection was produced in Germany in the 1860's and purchased by the first president of Cornell University Andrew D. White at the behest of founder Ezra Cornell.   Thus the something else first has been cataloging and rehabilitating the collection as well as developing the documentation describing these unique plow models.   The most cogent documentation is in German.  This has driven me into struggling with refreshing my German reading skills.   Over 45 years ago I passed a German reading skills test for my Ph.D.    Since I have not practiced those skills very much in the intervening years I am really rusty.   Within a few days I expect to receive a book from Barnes and Noble that I will use to refresh my German reading ability.     Another something else first.
I guess the message for all of us is that we always need to plan ahead for the things we want to do since we always have to do something in advance of what we want accomplish.

Posted by Gerry Rehkugler at 12:10 PM No comments: 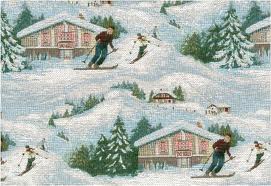 The current ski season at our local area is coming to a close after a long and high quality duration.   Each year and each type of ski area presents a unique run of ski days.   The times of beginnings and the times of endings run the gamut depending on the weather and many other factors.   As this ski season comes to a close I am reflecting that the variation in length and type of ski seasons at various locations can be a metaphor for the length and character of the arc of our lives.   Likely this thought is provoked by the recent deaths of several of my college roomies, classmates and friends.
Yesterday I attended a magnificent memorial service for one of my college roommates and long friend and colleague Dave Ludington.  I first me Dave when we were transfer sophomores at Cornell in 1953.   We both came from fruit farms in upstate New York and had similar hard working lives of that era.   We became close friends, double dated sorority sisters, and shared our trials and tribulations as well as rooming together for a couple of years.   Over the years, however, we progressed our more separate ways.    Dave navigated his life arc with seemingly few difficulties and no tragedies of family or other areas of life that we know of.  His demise from a brain tumor at age 76 seems premature for such a wonderful man and friend.   However, we do not know the length of the season of our life and just like a ski season our life season also will come to an end.
Obviously geezerhood is a period of both enjoying our geezer friends and mourning those who pass on.   Each of us has a unique story that is a thread in the tapestry of humanity.   Our thread may be straight, colorful, clean and long.  Or it may be twisted, short and stained or something in between.   Whatever our thread is in the tapestry of life, it is nice to think that we somehow contribute to the over all beauty of the final product.   Wouldn't humanity be dull if we were all the same?   Here's to celebrating our uniqueness and our own special destiny of our life season with our own beginning, life arc and end.
Posted by Gerry Rehkugler at 2:53 PM No comments: