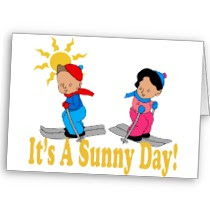 Yesterday I visited my ophthalmologist for an eye exam after about four years. I guess most seniors are expected to have an eye exam about every year so I was certainly due. In addition, it was time to renew my driver's license so I could get doctor verification rather than have to hassle the DMV. I was asked if I had any vision complaints. The only thing I could think of was trying to see the bumps on the ski hill on a cloudy day. My doctor got a chuckle out of my complaint. He said that it was the most unusual complaint he had encountered. In the course of our conversation he told me he regularly reads the obituaries in the New York Times and had read about J. R. Simplot who was an inventive creator of potato processing for chips and so forth who was an avid skier into his nineties. He was known for singing and humming while whizzing down the mountain. I never did that, but once had a pair of Hexcell skis that would sing all by themselves. Simplot was a legendary billionaire who convinced Kroc to introduce French fries to the menu for McDonalds. He maintained a vigorous life style throughout his nineties and passed away just short of 100. Google him for more detail.
All this brings to mind that one of the most frequent complaints I hear from my geezer friends is the difficulty of seeing the terrain on a cloudy day. My doctor reminded me that the lens of the eye develops some opacity as it ages. This disperses the light and reduces our visual acuity. Apparently if you use a yellow lens the UV is blocked and reduces this dispersion. My prescription goggles have the yellow tint and the combination of prescription and UV blocking certainly improves my vision. Today however was a beautifully sunny day. With the blue sky and great snow conditions it was certainly a "best ever" day on the slopes. Good vision makes for greater confidence and improved skiing. However, we adapt to what we have and any day on the slopes is a good day as far as I am concerned.
Posted by Gerry Rehkugler at 1:29 PM