Lift rides can be boring when you don't have a companion to talk to.   Almost all geezer skiers were gone at the end of my skiing day at Greek Peak so my thoughts on my latter lift rides wandered off to fantasies of how lift rides could be used to promote skiing and social networking.    I think I have a great idea that ought to be commercialized!   Television and other venues are frequently touting match making activities for singles who are looking for mates.   They all have schemes for getting couples together to explore mutual interests and possibly romance.    And apparently there are speed dating set-ups for singles to meet a variety of individuals.    How about using the lift ride as a speed dating arrangement.   A six to eight minute ride on the lift by a couple is adequate time to get acquainted and to determine if there is any mutual interest that can be pursued.
The logistics of speed dating would need to be managed so that no person rode up with the same person twice.   Perhaps we could issue numbers to the participants and have two lines that merged at the lift entrance to interface the individuals.   Maybe a ski area could do a promotion on this kind of event and discount a bit to get new and returning skiers back on the slope.  Probably one would need to do some skiing ability matching as well.   Since the participants would have a skiing interest to start with, they would immediately have something in common.   I think I will franchise this idea and see if I can sell it to ski areas.
Since my wife as a pastor is an accomplished pre-marital counselor, perhaps I could generate some business for her.    She could even become the female equivalent of Marrying Sam from Al Capp's comic strip Lil Abner. 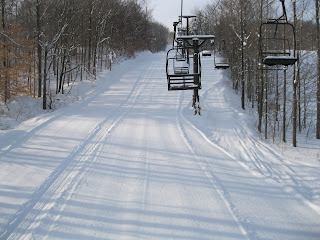 Lift rides can be boring but with a little imagination one can amuse themselves with any number of activities.   When I am not off into the wild ideas it is also a joy to simply observed the surrounding nature, the light play on the snow, and gyrations of skiers of a whole range of abilities.   And who knows, one may have an extraordinary revelation!
Posted by Gerry Rehkugler at 1:56 PM