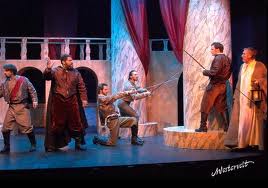 I must confess that I have never been able to appreciate opera.  However,  today NPR had a piece on Placido Domingo who has performed Othello over 200 times and is regarded one of the greatest tenors of all time;  especially for his passionate rendering of his role in Othello.   As I listened to his voice today, I could appreciate how great a singer he is.   I used to listen to the Metropolitan Opera on the radio when Texaco was the sponsor and on occasion I could appreciate the mastery of the operatic style but never found that it thrilled me as much as what I heard today.   As I reviewed Domingo's biography I was impressed that he continues to be so great at age 69, well after many of his contemporaries have retired.

At lunch today I quizzed one of my colleagues about the path that led him to enjoying opera.    He typically travels from Ithaca, NY to Chicago and New York City to attend operatic performances several times a year.   He comes from a Nebraska farm background but does have musical skills that placed him in an Army Band during his military service.  Thus he has some built in musical knowledge and the subsequent appreciation.    As he related to me his experience with opera he explained that it was coincidental that he became an opera fan.   By chance he attended an opera while attending the University of Minnesota and eventually acquired a taste for the drama and music.   He observed that one must really see and hear an opera as it is performed live to really appreciate the magnificence of this art form.   Perhaps that is the reason I have failed to acquire a taste for operas.   Maybe I ought to put that on my bucket list.   I don't want to be too crass, but maybe it is like one acquiring a taste for beer!

I don't want to offend Mr. Domingo, but I think he qualifies as geezer singer in the same way that Bret Favre qualifies as a geezer quarterback.   They both have exceeded the normal age of active performance with excellence in their professions.
Posted by Gerry Rehkugler at 5:55 PM