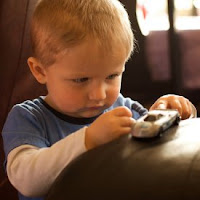 I always enjoy playing tennis with my Russian friend Viktor. He has good strokes and normally is a very formidable opponent. We often split sets and go to tie breakers. Both of us are entered in the singles group in the Senior Games in June. However, Viktor is a year younger so he will be playing in a younger bracket this year. In another year we will be in the same bracket for a while.
Our sets today were interesting. Our first set was a see-saw battle for a while but I was able to dominate in the latter stages. In the second set some other players came to the adjacent court and were briefly in conversation. Their presence was disturbing to Viktor and broke his concentration that he was unfortunately never able to recover. The result was that I was able to win the second set easily.
This all leads me to comment on the range of concentration abilities of people. I have been blessed with the ability to focus my concentration on a task to the exclusion of any surrounding distractions. This includes tennis, writing, crossword puzzle solving, and dealing with engineering, construction or mathematics problems. This ability is both a blessing and a curse. There are times that you need to be aware of what is around you for your own safety.
More than once while I have been engaged in a cross word puzzle my wife has said something that I should have heard. Fortunately she tolerates this short coming.
Posted by Gerry Rehkugler at 3:46 PM