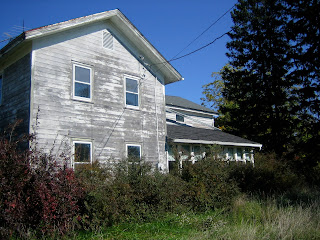 Weeds have a way of surviving in spite of anything we do to control them. Last evening I noticed our lawn was producing more than my share of dandelions regardless of our weed control service. So I spent a bit of time digging up a few of the dandelions as an old fashioned control mechanism. Perhaps we should reclassify weeds simply as vegetation in the wrong place at the wrong time and tolerate their existence.
There is a History Channel show that speculates on what happens to the earth after the demise of humans. The striking aspect of the change portrayed is how vegetation ( say weeds) begin to overtake all the structures, roads and cleared land areas of the earth. I think their portrayal is quite accurate. I grew up on a farm in Wayne County, New York where we produced various field crops, vegetables, and fruit. Our operations controlled the weed population both in the fields and the orchards. After the home farm was sold after my father died and my mother moved to town, the operator became lax in controlling the volunteer vegetation in the fields. The orchards did survive for a while but soon were abandoned. A couple of years ago I returned to the old farmstead to see what it looked like. After more than ten years of neglect everything was overgrown with the volunteer vegetation. Even the old farmhouse and barn were inundated with bushes vines, weeds and what have you. So the History Channel people got it right. My posted picture today is evidence of what I am writing.
Closer to home I also observe the tenacity of weeds. I regularly go to my office in Riley-Robb hall where I observe the flat roofs of our laboratory wings. The flat roofs have a membrane covered by approximately two foot by two foot insulating blocks. The cracks between the blocks accumulate sufficient soil and nutrients so we have a virtual forest of plants and trees growing out of the cracks. To my amazement some of these plant reach heights of three feet or more.
So, I think that weeds and vegetation are likely to be the survivors of homo-sapiens in the great evolutionary cycle. Do you think that weeds will ever develop into intelligent entities? Who knows?
Posted by Gerry Rehkugler at 3:55 PM