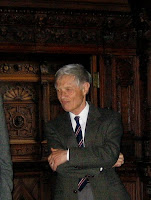 Today I attended a retirement party for one of my colleagues, Yves Parlange. A world famous engineer, member of the National Academy of Engineering, winner of many prestigious national and international society prizes. It has been my privilege to know him for over 25 years. It was a wonderful party with accolades from colleagues and friends from around the world. (See photo of Jean-Yves). I also know a bit of his family history that causes me to reflect on the influence of family on career choices by the next generation. His father was a physician who managed French related hospitals in many parts of the world. Why Yves became an engineer is not clear to me but he certainly has had a brilliant career and still is very productive. Among the career choices of his children, a son is an engineer in academia and a daughter is a dentist. So I assume that the medical background and engineering background has influenced the career choice of his children.
I am convinced that parental careers do have a significant impact on the career choices of children. I find that my physicians often have a physician parent , uncle, or aunt. Often law firms have generations of attorneys in the same practice. And business leaders often hand off their business to the children. While the family influence among the professions seems to be the most evident, it is not clear how family influence effects career choices of children of merchants, laborers and service workers. In the United States, although family circumstances influence career choices, I believe we still have a society and system that provides the whole spectrum of opportunity for each succeeding generation. I came from a hardscrabble farm background and was fortunate to have the opportunity to attend college with the help of scholarships and support of a multitude of people. Although I will always honor my roots in agriculture, I was drawn to engineering and was able to make that transition. Perhaps I started another family tradition since two of my children and one step-child became engineers. However, the other four of my extended group of children have gone on to a variety of career paths.
It is regrettable in much of the world that career opportunity is often determined simply by you birth family situation. National Public Radio has been broadcasting a series on the Trunk Road through India and Pakistan where they have interviewed people that they have encountered along this highway. Today they interviewed a family of brick makers. One individual of 18 years of age had been making bricks full time since he was 10. And all his siblings and family regardless of age seemed to be doomed to making bricks for the rest of their lives. I guess if you enjoy making bricks, there is nothing wrong with that as a choice. However, in the case of these individuals there is no choice since they are denied education and any other opportunity to change circumstances. So, I conclude that family has a significant influence on career choice and this both can be a blessing and curse. Oh that we all could "Follow our bliss" as summed up by American Mythologist Joseph Campbell.
Posted by Gerry Rehkugler at 7:04 AM