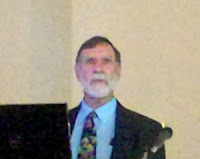 Yesterday I attended a professional meeting, Northeast Agricultural and Biological Engineering Conference in Geneva, New York. This is a section of the parent organization Agricultural and Biological Engineering Society. It has been several years since I have attended one of these meetings and it was good to connect with some of the research and projects that are currently under way at Northeastern universities with biological, environmental and agricultural engineering departments. It was a time of reacquainting myself with old friends, former students, and new members of the the society.

It was refreshing to find that I was not as professionally stale as one might be 14 years after retirement. The fundamentals of engineering do not necessarily change with time. As new technology comes along, old problems become more tractable and we make progress.

Three of my former students were at the meeting and all of them were complimentary of the experiences that they had in my classes. One who I had taught surveying and drafting was especially appreciative of the knowledge imparted in my classes. He claims to have often found employment with various engineering firms because of those special skills. One of my former students actually falls into the category of being a "geezer". Dr. Arthur Johnson was one of my earliest students in a machinery design course is now retired from the University of Maryland. I can't believe he is sixty nine!! At the time he took my course, I was a mere six years older than him. Art has been an extremely successful engineer who is a fellow of several professional societies and author of three books related to biological engineering. We have collaborated frequently on the development of biological engineering education. (See his photo above.)

Perhaps one of the greatest things about a long career at a university is the connections that you make with your students that last a lifetime. Hats off to my now geezer students. And as I am now advising current students, I look forward to enabling their success during their time a Cornell and to live long enough to hear of the professional success in the future.
Posted by Gerry Rehkugler at 11:44 AM

A bonus feature whereby your winnings may be multiplied by as a lot as ten times. You’ll discover slot video games themed on TV exhibits like The Price is Right, comic e-book heroes, and music stars like Ozzy Osbourne. It's tough to know the precise variety of downside gamblers amongst service members because the that} military stopped screening for it more than a decade ago and has solely resumed screening following the 2017 먹튀사이트 먹튀프렌즈 GAO report.